The state of Arizona was still on a generalized stay-at-home order Friday morning. But that did not stop a handful of businesses from announcing they planned to reopen anyway, in seeming violation of Arizona Gov. Doug Ducey’s ongoing orders.

Ducey this week extended what had already been a month-long shutdown of nonessential services in an effort to slow the spread of the coronavirus. But some small businesses had already vowed to reopen May 1 – with or without the governor’s permission.

Some firebrand businesses owners backed down from their vows to defy a state shutdown, while others were preparing to open their doors. The question facing Arizona on Friday was how many might really break the rules, and what, if anything, would be the consequences.

Biggest layoffs: These are 21 of the American businesses temporarily laying off the most people

There was a steady stream of diners taking tables at the Horseshoe after it opened its doors Friday at 6 a.m. Bedoian’s Bakery and Bistro, located next door, was also open.

Just after 9:30 a.m., though, two uniformed Wickenburg Police Department officers entered both establishments carrying copies of Ducey’s executive order. An officer told Deb Thompson, the owner of the Horseshoe, that she needed to ask her diners to leave.

Thompson, nearly in tears afterwards, said she told the officer she would not do so. “I’m not going to comply,” she said. Thompson said she expected he might come back and arrest her. “I don’t care anymore,” she said.

Ducey’s adjusted order begins to ease some restrictions next week, leaving some businesses just a few days to wait before at least some work would be possible. But other businesses would remain under restrictions, and some were tired of waiting.

In the east suburbs of Phoenix, someone had an appointment to have their eyelashes done. In Phoenix, members were free to open up a gymnasium’s door using a keypad, something the owner said, frankly, they were free to do even before he made his reopening official.

It was not known how many businesses planned to defy the governmental orders, which had been issued and then extended to slow the spread of the novel coronavirus. Some touted it on social media pages. Others quietly waited to click on the neon open sign in their window.

Some wanted to be named when interviewed by The Arizona Republic, part of the USA TODAY Network. Others either requested anonymity, including the salon owner with an early-morning lash appointment or declined to comment.

This rebellion, however small or large, against the state’s order had an economic motivation.

Owners of what the state of Arizona deemed not “essential” had no opportunity for revenue since the stay-at-home order was issued by Ducey on March 30. Restaurants were restricted to take-out only, a move that saw revenues plummet. Bars were shut down entirely.

Some owners said they had been rejected by banks for the federal loan programs designed to help small businesses see their way through the shutdown. Sole proprietors, especially those in the salon industry, said they could not qualify for any unemployment.

But, in speaking with a handful of business owners who decided to reopen, there were other reasons that went beyond dollars and cents.

Some said they were tired of playing the part of what they saw was overhyped fear of COVID-19, the disease caused by the coronavirus.

“This is blown out of proportion,” said Wendy Moore, owner of the Beauty Mark in Surprise. Her appointment book showed a 10 a.m. appointment for a lash treatment Friday at her one-chair salon. “People need to stay home if they’re sick, but I do not believe the whole economic structure needs to be shut down.”

Others saw themselves fighting for civil liberties, battling what they perceived as government overreach.

“We are seeing businesses standing up for their Constitutional rights and civil liberties against, in my opinion, a tyrannical governor,” said Nohl Rosen, who operates a mobile computer repair business in Wickenburg. Rosen, who is also part of the Patriots of Wickenburg group, a constitutional conservative group, organized about a half-dozen businesses along the city’s main street that wanted to re-open on Friday, including the Horseshoe Cafe.

The planned defiance of the shutdown came two days after Ducey announced an extension of the Stay Home, Stay Healthy, Stay Connected order he had issued on March 30. It had been set to expire Thursday.

On Wednesday, Ducey extended it to May 15, with some slight modifications and the promises of more.

By Monday, he said, retail businesses could offer shopping by appointment or through curbside or delivery orders. By next Friday, he said, retailers could open so long as they allowed people to keep the federally-recommended distance of six feet from each other.

Still, many businesses that couldn’t maintain those distances faced longer waits and no certain reopening date.

Ducey talked of “aspirational” dates of restaurants opening and said discussions were underway with representatives from the salon industry.

His plea for patience, though, did not resonate with some business owners. They had already taken to social media, either their own pages or private groups, to announce that they would open their doors again.

“I’m not trying to be disobedient,” said Jennifer Anderson of Vivaldi Salon Suites in Peoria. “I don’t know the governor personally and have nothing negative to say about him.”

Anderson was scheduled to do her first hair coloring on Friday. But that patron canceled. She will go in on Monday though, in defiance of the order, but not scared for her health or that of her customers.

“I already sanitize and do everything over-the-top anyway,” she said. Licensed beauticians like her are already trained in how to ward off communicable diseases, she said.

Anderson said she saw a sinister hand at play with the statewide, and nationwide, shutdown over a virus that, despite medical experts’ statements otherwise, was no worse than the seasonal flu.

“A lot of things are going on behind the scenes,” she said.

What Anderson did fear was Ducey’s implicit threat during Wednesday’s news conference to fine and jail people and go after licenses.

On Wednesday, Ducey singled out drinking establishments, saying defying the orders would be “playing with your liquor license.”  Anderson said it could just as easily apply to her.

Ducey’s talk was enough to ward off Scott Weigele from opening his Draw 10 bar in east Phoenix.

Weigele, during an April 20 rally at the state Capitol, announced that his bar would open May 1. “I’m prepared to go to jail if they want to take me to jail,” he told the crowd. He said he was opening “come hell or high water.”

Weigele had stocked up on food and liquor for Friday’s planned opening. He figured he would draw a large crowd of thirsty and rebellious patrons. He figured reporters and cameras would swarm.

Jail, he could deal with, he said. But losing the liquor license would mean closing the bar his father started 40 years ago, something, he said, he could not risk.

Weigele said that Ducey “pulled the coward card” with the threat.

Weigele said he thought the concerns of the virus were overblown. He said he thought it was designed by China as a tool to thwart the U.S. economy. He believed China would eventually release the vaccine they had already created for it. Not that he would take it, he said.

He also said he saw fingerprints on the coronavirus epidemic from an intentionally-shadowy group of figures bent on world domination. Part of achieving that, he said, was taking down the United States.

“I’m not a conspiracy theorist of any kind,” he said. “But there are people much greater than me that want to see this country fail.” Weigele said he believed those forces have been at work since the country’s founding in 1776.

Enforcement remains to be seen

Even as some proprietors stewed over being shut down, the larger impact of the rules sometimes seemed fuzzy.

Some businesses, it seemed, could read through the 1,700-word list of “essential services” Ducey had identified and find space for themselves on the list. Boutiques sold handmade cloth masks. Bookstores offered drive-up sales under the order that allowed them to “supply products needed for people to work from home or conduct distance learning.”

Those businesses, though, said they were trying to operate within the spirit of the law.

It was not clear what enforcement would take place on Friday as more businesses stepped into the fray looking to defy it. There had been scattered reports over the last few weeks of officers asking businesses to close or stopping residents from using parks.

The liquor department did not provide additional guidance on what jeopardy license holders would face for opening.

As Friday afternoon turned into night, a group called Great 48, which organized a “gridlock” rally at the Capitol that saw cars circling the government buildings, was scheduled to have a picnic at a park abutting a pizzeria in Fountain Hills.

The pizzeria, Euro Cuisine, had already been cited by the Maricopa County Sheriff’s Office for allowing dining on its patio.

But Friday’s 5 p.m. event was set to be take-out only and spill into Fountain Hills Park.

Attendees were asked to keep themselves spread out, maintaining the recommended six-foot distance.

But they were also encouraged to have fun.

“Enjoy the weather,” owner Marita Kraja said on a video posted on Facebook to promote the event. “Enjoy life. Make a party.”

As a service, we are offering coverage related to public safety free of charge. If you want to support local journalism, subscribe.

MORE RESOURCES: How to stay connected | Your questions, answered | 10 things you should know | Can I get tested?

Stay-home order still in place; some return to work

Sat May 2 , 2020
LANSING, Mich. (AP) — Gov. Gretchen Whitmer said Friday that Michigan’s stay-at-home order remains in effect through May 15 despite Republicans’ refusal to extend her underlying coronavirus emergency declaration, as she amended it to allow construction, real estate and more outdoor work to resume in person next week. The Democratic […] 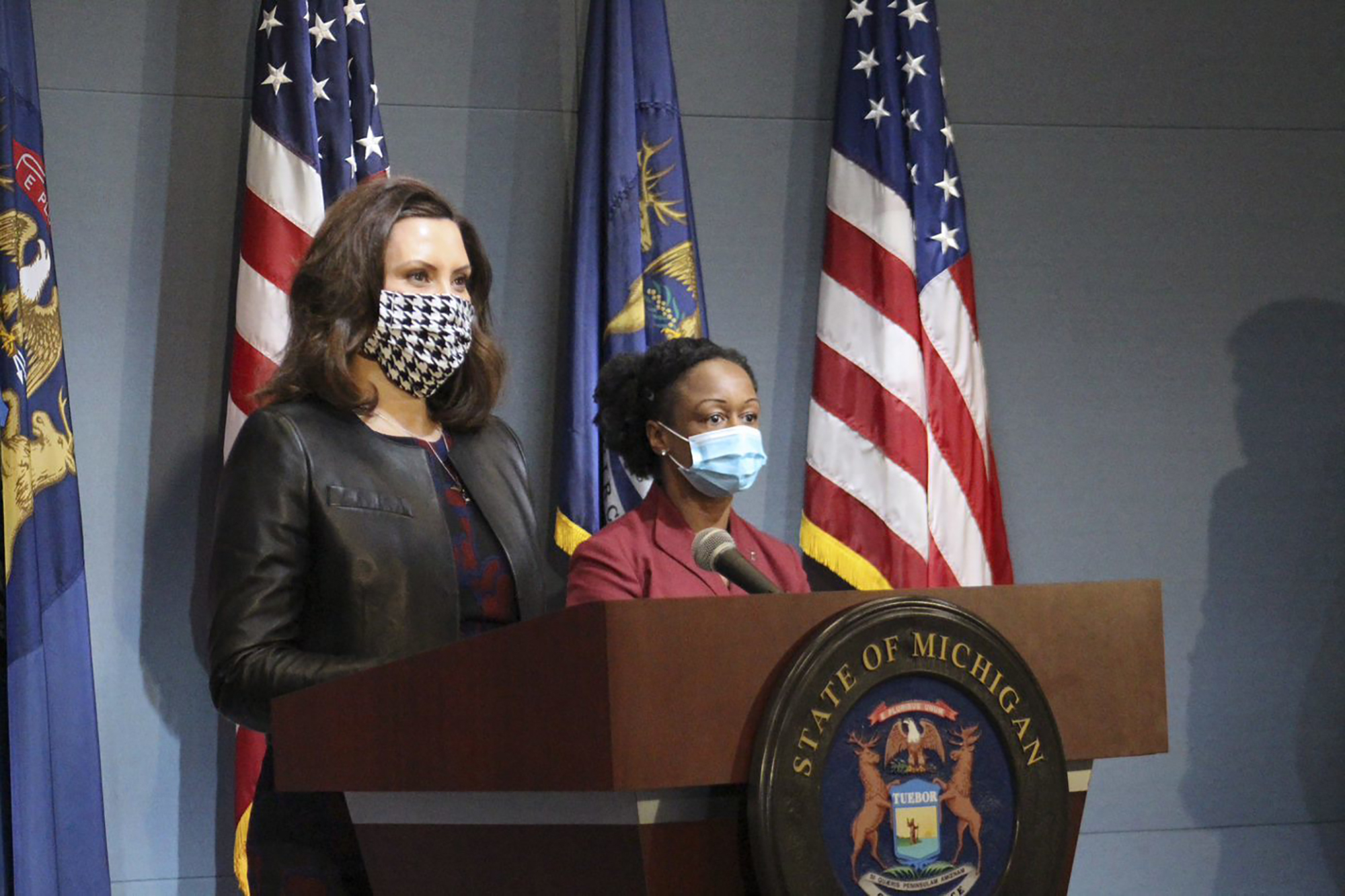