The economic fallout from the COVID-19 pandemic is slamming cities and towns across the state.

But for Taft, a city of roughly 9,300 people in far western Kern County, there have been a few extra punches to the gut.

With prices and demand for oil down, the thousands of pump jacks that ordinarily bob up-and-down on the horizon are at a virtual standstill. That is adding to the misery on main street, where restaurants, gyms, stationery shops and other stores have been ordered closed.

And then there’s the fact that another major employer, the privately owned Taft Correctional Institute, closed its doors on April 30 after sending hundreds of uninfected prisoners to coronavirus hot spots across the country. The decision to close the federal prison was made last fall, long before the pandemic struck, but now the economic pain is hitting.

“It’s been a rough couple of months,” said Mayor Dave Noerr, who is pivoting as fast as he can to get his town’s economy up and running again.

Taft sits at the base of the San Emigdio and Temblor mountain ranges, between the Midway-Sunset and Buena Vista oil fields, in the southwest corner of the San Joaquin Valley. The smell of oil in the air along Mocal Road, just to the northwest of town, is unmistakable.

Once known as Siding Number Two — a stop off the Southern Pacific railway — Taft was subsequently named Moro, then Moron, before town leaders settled on naming the area after then-President Taft in 1912.

It’s been the geographical center of the California oil industry, where companies such as Chevron and Aera siphon up crude from the vast reserves pooled under this remote, dry region dotted with sage brush, clover and buckwheat.

On April 27, Taft’s City Council voted unanimously to open up for business on May 3, in defiance of Gov. Gavin Newsom’s orders.

“Local government should have the flexibility and discretion to navigate reopening stages in a timeline that works best for their communities,” wrote Noerr and those co-signing the letter. Noerr sits on a Kern County advisory board that is evaluating how best to respond to the governor’s orders.

“I hate to say it, but the civil unrest we have been seeing seems to be having a positive effect,” he said, referring to protests over the weekend and the governor’s decision to reopen beaches around the state.

Several counties and cities have pushed back against Newsom’s emergency orders. In the far northeastern part of the state, Modoc County opened up for business on Friday. Sheriffs in Del Norte and Humboldt counties announced they would not enforce the orders.

Kern County has also opted not to enforce the restrictions.

“I see no reason why we should remain closed,” Noerr said in an interview, last week, not wearing a mask. He said the overall economy of the town likely has shrunk by 40%. He doesn’t yet have the numbers to show the true impact.

Sitting at the base of a bronze statue dedicated to the 20th century oil worker pioneers who built the city and the region’s oil industry, Noerr pointed to Kern County’s COVID-19 numbers, which show that Taft now has 16 cases, and that hospitalization rates in the county have started to dip.

“If you were to compare those numbers to the levels of domestic abuse, child abuse, alcohol abuse and drug abuse situations over the past few weeks, you’d see the virus pales in comparison to the damage being done by the shutdown,” he said.

When asked for those numbers, he said he didn’t have them and referred questions to the police department.

“I think we should open up the hair salons, and nail salons,” he said. “We need to let people go to those places where they can start to feel better about themselves.”

Noerr, who has the support of the oil industry — several oil company and trade group officials referred a reporter to the mayor for information about the oil industry in California — believes the business will rebound soon.

And he said it should be an American priority to support the nation’s oil industry.

“Why are we buying oil from overseas when we can make it right here, in California, with some of the strictest environmental and workers’ rights regulations in the world?” he said.

The closing of the privately owned federal prison was another setback for the town.

According to emails and news reports, the decision was made last fall by federal prison officials concerned about structural issues with some of the buildings.

On April 29, a burrowing owl sat on the coiled-razor wire fencing snaking the perimeter of the vacated facility. Correctional officers went in and out of the building, emptying the site of filing cabinets, chairs and microwave ovens.

According to news reports, more than 1,000 inmates were sent to a handful of prisons across the nation, including Lompoc and Mendota in California, as well as the North Lake Federal Correctional Institute in Michigan and another federal prison in Texas.

A Bureau of Prisons spokesman declined to name the Texas prison, saying instead that the bureau “determined suitable locations to best manage its population.”

None of the Taft prisoners had coronavirus upon departure but were sent to facilities where the virus has spread. As of Sunday, the Santa Barbara County Health Department was reporting 107 cases at one of those facilities, the Federal Correctional Institute, Lompoc. Some 400 prisoners were also sent to the North Lake facility in Michigan, where state officials there were reporting that nine inmates and at least five staff were infected as of mid-April.

In April, Rep. Kevin McCarthy (R-Bakersfield) and Sen. Dianne Feinstein (D-Calif.) wrote a letter to Michael Carvajal, director of the bureau of prisons, urging him to reconsider transporting the prisoners from

Taft Correctional Institution during the pandemic.

“The BOP’s decision to continue with the mass transfer of inmates… around the country clearly and directly contradicts guidance from federal, state, and local authorities, as well as your own recent directive,” they wrote. “These actions are unnecessarily putting inmates and staff at the TCI, the broader community of Taft, and other inmates and staff in the federal prison system at risk of not only contracting COVID-19, but also further spreading this virus…”

A spokesman for the prisons, Scott Taylor, said it necessary to vacate for “critical facility repairs.”

Former correctional officers at the facility last week seemed overwhelmed, concerned and perplexed by the prison bureau’s decision to close during this period and transport prisoners.

Yeni Lopez, a Taft resident and quality control specialist at the prison, said she was “blindsided” by the decision.

Nor did Ray Smith, the owner of the Acme Almost Anything Jewelry and Gifts shop on Center Street.

He said that, among the knickknacks and jewelry he sells, he’s also got a few essential items, such as flashlights and batteries.

“I was in the oil business for decades,” he said, and was always known as a guy who wasn’t afraid to say what he thought. “People called me abrasive.”

“Nobody’s stopping me from keeping my shop open,” he said, leaning back on a chair on the sidewalk out front of his store.

“But maybe that’s because they know better.”

Los Angeles Times reporter Susanne Rust and photographer Carolyn Cole are embarking on a road journey throughout California. They aim to give voice to those in remote parts of the state as they grapple with the worst health and economic calamity of our lifetimes.

Wed May 20 , 2020
Can I get an order of sci-fi animation from Justin Roiland? Hold the existential dread. Hulu’s Solar Opposites, streaming all of its eight-episode first season today, has a lot in common with Rick and Morty. The animation style, the humans-meet-aliens comedic throughline, Roiland’s guttural voice acting — it’s all apparent […] 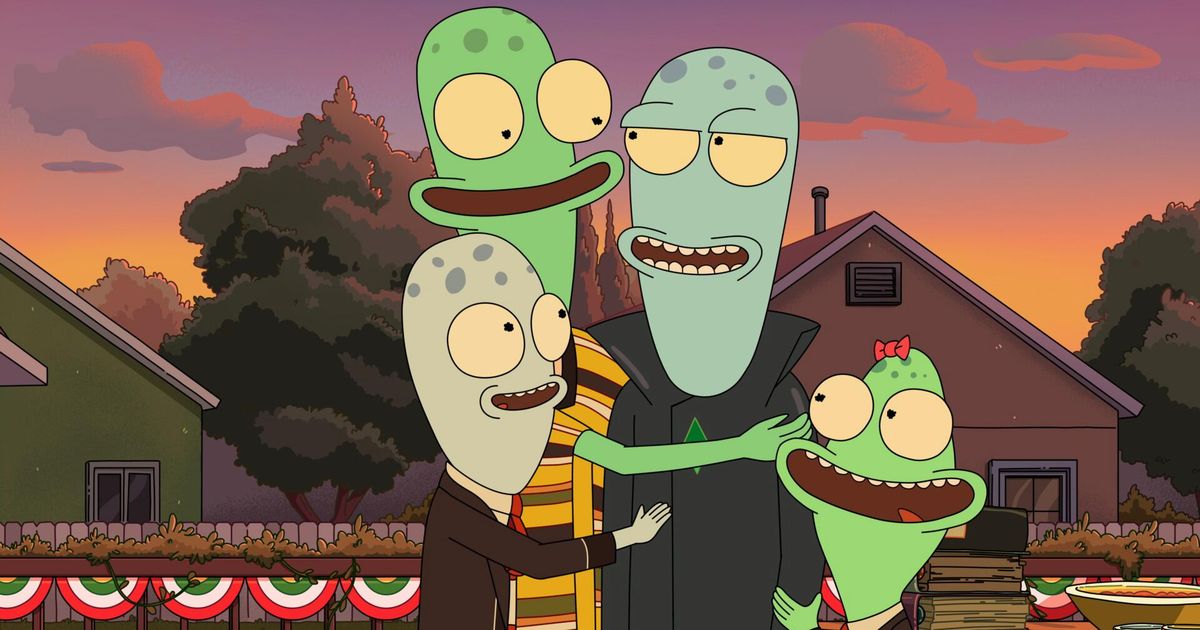