The Swanson Funeral Home in Flint was forced to close in 2017.

Three urban explorers made a gruesome discovery inside an abandoned funeral home in Flint.

In the dark basement of Swanson Funeral Home on Saturday was the body of a Black man crushed underneath a hydraulic coffin lift that had fallen through the first floor. Just inches from the body was a cell phone.

“You could see he had tried to crawl out from underneath it,” one of the explorers, who goes by Harley.Q.Urbex on Instagram, tells Metro Times.

The explorers called 911. When police examined the body, they told the explorers that the man appeared to have died less than a week earlier.

“I’ve done some crazy shit, but I never expected to come across a dead body, and especially not one crushed to death by a lift,” Harley.Q.Urbex says. “We were all pretty freaked out.”

It’s unclear if police were able to identify the body. They didn’t return Metro Times’ calls for comment.

It was just the latest eerie discovery at Swanson Funeral Home at 2210 Martin Luther King Ave., which was forced to close in 2017 after state inspectors allege they found unrefrigerated human bodies, maggots, blood-stained casket pillows, and an unsanitary preparation room.

In January 2020, urban explorers found what appeared to be cremated human remains, bottles of chemicals and embalming tools.

When the funeral home closed its doors, it left behind supplies and a hearse in the garage. 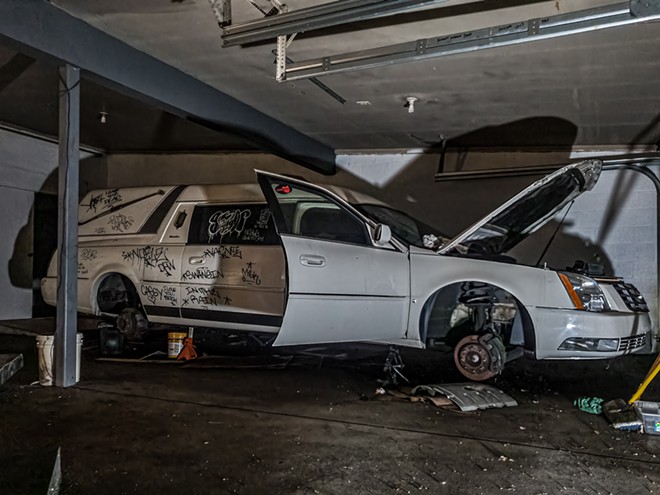 A dead body was found inside the Swanson Funeral Home in Flint.

Over the past four years, state officials investigated several funeral homes where hundreds of cremated remains, including fetuses, were left behind. In February 2019, detectives found at least seven sets of cremated remains in the basement of the former Howell Funeral Home in Detroit, which had been closed for several years.

In October 2018, 63 fetuses were found inside Perry Funeral Home on Detroit’s west side. Just a week earlier, police made a similar discovery at Cantrell Funeral Home on Mack Avenue on the city’s east side, where 11 fetal remains were found.

Soon after that, inspectors found the remains of more than 300 fetuses, infants, and adults and “extremely unsanitary conditions” at Cantrell Funeral Home.