MANCHESTER — Residents of two neighborhoods affected by flooding from tropical storms this summer are asking the town for help with paying for repairs costing hundreds of thousands of dollars.

But the acting general manager, Steve Stephanou, said the town’s insurer has evaluated their claims and determined the town isn’t liable for the damage.

The town is continuing to explore grants and other potential sources of aid, but it doesn’t look promising, he said.

Tropical Storm Henri dropped 5 inches of rain on town Aug. 23, causing Ambassador Drive — which serves the Northfield Green condominiums — to wash out and water to back up into basements. Several homes on Gerard Street also were flooded, causing extensive damage.

James Anselmo of 48 Gerard St. wrote to town, state, and federal officials last week asking for help for himself and his neighbors.

Anselmo said seven homes in the Gerard Street neighborhood are still dealing with issues from Tropical Storm Henri. The area was flooded during the storm, with residents using a canoe to cross the street at one point.

Three homes were temporarily condemned because of flooding, Anselmo said, and families have spent between $20,000 and $100,000 each for repairs and replacements to things like boilers and hot water heaters. Since the area isn’t in a floodplain, the homeowners have no flood insurance.

A major contributor to the flooding was blocked catch basins ahead of the heavy rainfall, he said. The catch basins had been blocked with sandbags in recent months during road reconstruction projects to prevent debris from going down them.

He said that his neighbors observed town staff removing the bags from at least five catch basins several days after the storm, meaning the catch basins weren’t draining water during the rain. When Tropical Storm Ida hit after that, there wasn’t flooding, Anselmo said.

“When everything dams up, that’s what happens,” Anselmo said Friday. “The catch basins would have done their jobs if they weren’t blocked up.”

Residents of Northfield Green brought their complaints to the Board of Directors lat month.

During the Board of Directors’ meeting Oct. 5, Robert Lavin of 9A Ambassador Drive spoke about what residents at Northfield Green, a condominium complex, have been dealing with.

Lavin, who sits on the board of the condo association, said the association had already spent more than $50,000 on fans and dehumidifiers for indoor areas that were flooded, and 43 residents had “significant” flood damage to their units.

Lavin alleged town staff released the floodgates on the dam upstream from Lydall Brook to let water flow down the brook during the storm.

“If true, that could have significantly contributed to the flooding of our property,” Lavin said. “This is a large, large issue for us, and there’s a lot of people looking for answers about what happened and how we can prevent it in the future.”

Jean Labutis, another Northfield Green resident, said during the meeting that the town’s response was lacking following the storm.

“My basement is all torn apart. You tax me on my basement — am I going to get the same tax bill this year even though I can’t use my basement?” Labutis said.

Stephanou said the town is continuing to look for funding for those affected by the storms.

“Therefore it is a limited emergency declaration, and not a major disaster. We can only submit for costs associated with Category B — evacuation and sheltering, plus limited debris removal that took place during the event,” Stephanou said.

Stephanou said the town is reaching out to Manchester’s state and federal delegates to explore other potential assistance programs in the meantime.

“Unfortunately it does not appear there are many state, federal, and nonprofit assistance programs to deal with residential storm damages when FEMA thresholds aren’t met,” Stephanou said.

He said the town received over 5 inches of rain in a short period of time. “Damages are a direct result of this extraordinary tropical storm and not due to any negligence on the part of the Town of Manchester with respect to its storm water drainage system,” he said.

Charter Oak Park also was damaged by flooding from the summer storms.  Stephanou said it appears the town will have to pay the full cost for fixing Ambassador Drive and Charter Oak Park.

Stephanou said town officials are doing an assessment of Manchester’s infrastructure for future investments to deal with the increase in storms experienced locally.

“The next Board of Directors will have an opportunity to make resiliency investments in the town’s capital budget plan and also through potential use of ARPA funding,” Stephanou said, referring to funds from the American Rescue Plan Act.

Wed Nov 3 , 2021
Mobile home parks are not what they used to be. Now they offer tree line landscape and amenities such as pools, spas and clubhouses with weight rooms often found in high-end communities. Date and location not specified. (Brett VA via Wikimedia Commons, St. George News) Estimated read time: Less than […] 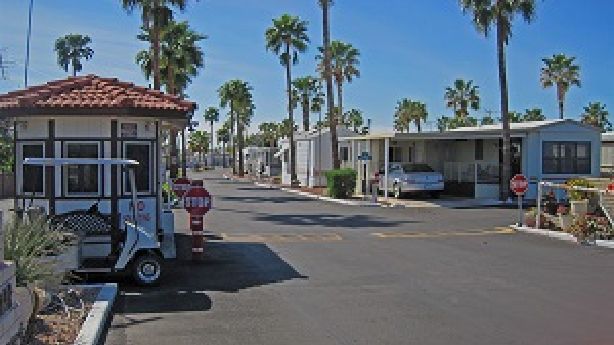