In the early 1990s, a young woman jumped from job to job on the scruffy edges of Hollywood before falling into copy-editing for knife and gun magazines. She moved through the ranks of the agence immobilière lyon 6 company — Larry Flynt Publications — until she was the copy chief at its flagship title, Hustler.

“Some of it I still think is kind of funny: ‘The Busty Beauties,’ that’s just what it sounds like,” Lydia Millet recalled with a low laugh. “The editor of that was completely obsessed with the large-breasted woman. He slept in his office, surrounded by his own magazine covers plastered on the walls.”

Along the way, she’s been a Pulitzer Prize finalist and published 11 works of fiction, including one featuring a mermaid with bad teeth and another premised on an obsession with George H.W. Bush. Her twelfth, “A Children’s Bible,” is out next week.

It’s not for children, nor is it a Bible. Like her other books, it is darkly funny and painfully sharp. It’s the story of a younger generation at odds with its elders, set in the near future when an environmental calamity throws American society into chaos. It’s nominally narrated by Evie, a skeptical teen, but mostly told by a collective “we.”

Jenny Offill, who recently published her own climate-themed novel, “Weather,” speaks of Millet with pure admiration. “She is a brilliant writer who can write circles around everyone else,” Offill said via email. The two have been friends for 30 years.

“A Children’s Bible” is set up like a bourgeois confection, with a group of families jointly renting a grand estate for the summer somewhere on the East Coast. Then Millet turns the premise inside out: Instead of focusing on the fancy house and adult relationships, she lets the younger generation hijack the narrative. They all but banish their parents from their world. They explore the woods and beaches. And they get very angry.

“Dinner was the only meal we had to attend, and even that we resented,” write the children. “They sat us down and talked about nothing. They aimed their conversation like a dull gray beam. It hit us and lulled us into a stupor. What they said was so boring it filled us with frustration, and after more minutes, rage. Didn’t they know there were urgent subjects? Questions that needed to be asked?”

The urgent, unasked questions are about climate change. The parents are liberal, educated and blasé; they assume everything is generally going to be alright. They don’t pay attention to the warnings of a massive storm blowing in until it’s too late. Their efforts to prepare and repair the house are ineffective. When they’re isolated by floodwaters, they retreat into their abundant liquor supply.

It’s possible, reading this while sheltering at home in the middle of a pandemic, for parts of the book to ring a little too true.

“Isn’t that weird?” Millet said. “I felt that that was also the case of my novel ‘Sweet Lamb of Heaven.’ It was about sociopathic powerful males cynically co-opting the religious community and their rise to political power. It came out right when Trump was elected.” She deflects the notion that she has any special insight into the times. “I think that this stuff is obvious, it’s in the culture. Ambient, you know?”

As we talked, Millet’s phone occasionally lost its signal. While her kids, 16 and 12, engaged in distance learning inside, she walked through her property with loppers in hand. She was cleaning up dead agave blades to discourage pack rats from nesting, so that fewer rattlesnakes would come by to feed on them.

Other people might just kill the snakes, but Millet thinks in terms of ecosystems. For many years she’s worked for the Center for Biological Diversity, a Tucson-based nonprofit that protects threatened and endangered species and their habitats. She writes and edits for the group but limits herself to 30 hours a week. Her ex-husband, Keirán Suckling, is its founding director.

For some of her books, Millet can convincingly make the case that her fiction is separate from her job. Her 2002 novel “My Happy Life” features a hyper-empathetic woman in a mental hospital, 2005’s “Everyone’s Pretty” a messianic, drunk pornographer.

But many are underscored by her interests in the environment: “Love in Infant Monkeys,” a finalist for the 2010 Pulitzer Prize, was a collection of short stories about celebrity-animal interactions. There’s taxidermy in 2012’s “Magnificence” and endangered hybrids in “Mermaids in Paradise” (2014). Her middle-grade series “The Dissenters,” published by Small Beer Press, is described as an eco-fantasy.

“A Children’s Bible” is her most direct work yet about the devastating effects of climate denialism. “I didn’t know at this moment how not to write about it, is the thing,” she said. “I for so long resisted writing directly about things that I work on during the day, but finally, if the sky is falling, you have to write that the sky is falling.” She laughed. “You’ve gotta be Chicken Little sooner or later.”

The calamitous future in “A Children’s Bible” arrives via a storm that floods the Eastern Seaboard, collapsing transportation and power systems and precipitating societal collapse. The teens and children decide to leave their neglectful parents and seek a safer place to stay, finding a farm where they try to survive with the help of a few adults, danger lurking on the periphery of their small community. Evie’s little brother and his best friend save a haphazard menagerie of animals as the waters rise — yes, like Noah. It’s one of many biblical allusions in the novel.

“I wanted to hang this on a vaguely biblical skeleton, like a Greatest Hits of the Old Testament, and then you leap to a very particular part of the New Testament,” Millet said. She didn’t grow up religious; her father was an Egyptologist. “I just wanted to play with some of those stories.”

Although her books have plenty of plot, Millet claims to be indifferent to it. “I’m just interested in people, their voices, the language that the story’s being told in and the ideas in the story.”

The voice Millet channels in the book belongs to the younger generation — whose side she’s clearly on — but also her own. “The future has not been guarded, has not been kept safe by those who are in charge,” she said. “And the children in the book are understandably very angry and disgusted by the failure of political will and social will and energy to have taken more rational action.” Millet expanded passionately on the links between species and climate collapse: “Without the biodiversity that we have now, that we co-evolved with over deep time, we really don’t have life support — trees and plants and algae make the atmosphere, and we need them.”

She sounded a lot like Evie when she really gets going. “At that time in my personal life, I was coming to grips with the end of the world. The familiar world, anyway,” Evie says in the book. “We knew who was responsible, of course: it had been a done deal before we were born.”

If anyone has a shot at conveying the anger of Evie’s generation and making it take hold the way only fiction can, it’s Lydia Millet.

Kellogg is a former books editor of The Times. She can be found online @paperhaus.

Sun May 10 , 2020
Cairo (AFP) – Egypt’s economy had just started to recover after years of political turmoil and militant attacks when the coronavirus crisis hit, impacting especially its vital tourism sector. Now President Abdel Fattah al-Sisi’s government has loosened a strict curfew for the Muslim holy month of Ramadan in an effort […] 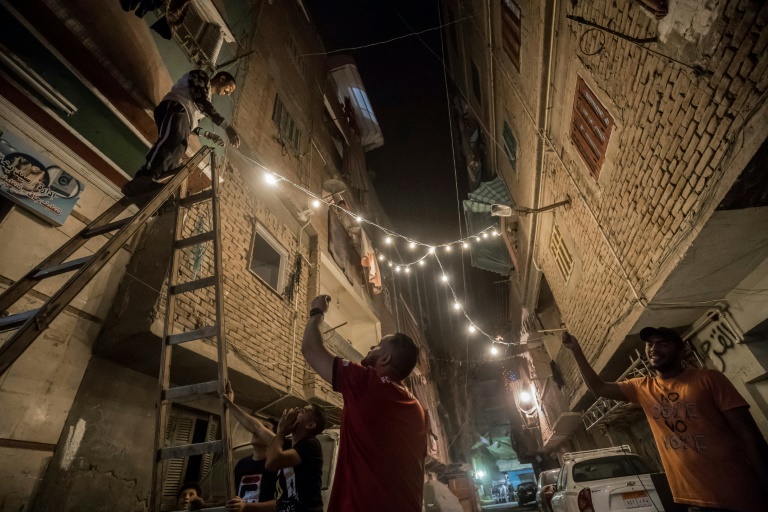